My best friend, Teresa, just bought two guinea pigs: H and M. After some treacherous events in the last 36 hours (I accidentally dropped H so she hit her arm on the wall and has been limping since; there was an original M but she was bigger than H so there was some territorial conflict between each other; we went to the pet store to replace the original M with a “new M” and then to the vet to see how grave H’s injury was…), both of them are now sleeping in a cage full of alfalfa, kale, hay, and carrots at Teresa’s place. H and new M seem to get along with each other very well: they hung out and made their typical “happy squeaking” while Teresa and I were watching an episode of Veronica Mars. This is the first photo of H ever, and hopefully I’ll post a picture of M soon. Say hi, H! 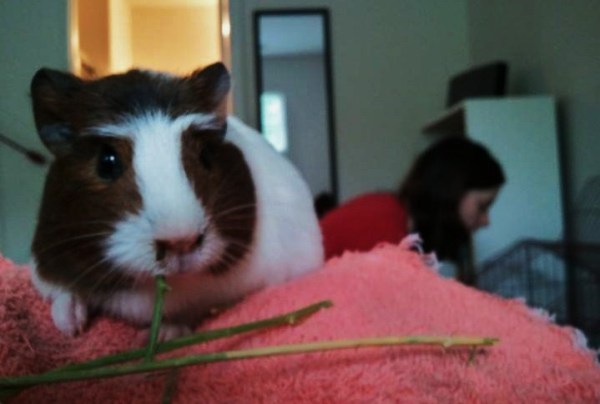 Petting H while watching TV reminded me of my Peruvian cat: Clovis. She’s 14 years old already meaning she has accompanied me during my entire youth. 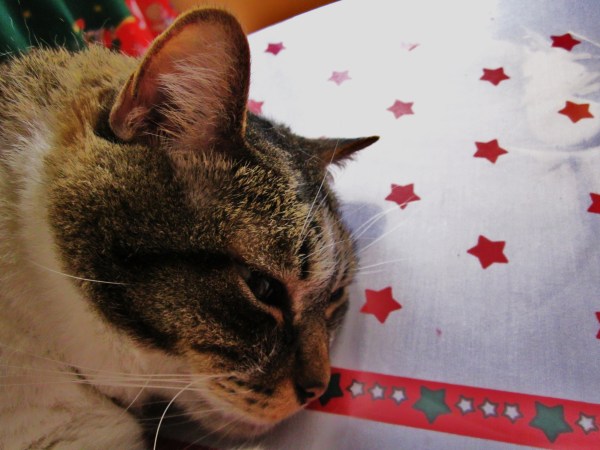 In March 1999, a neighbor who studied in my high school gave her to me when Clovis was just two months old. It was an abrupt decision: my neighbor’s cat had just had a litter so he was looking for people to adopt the kitties. As you can imagine, the unexpected appearance of a cute kitty at home was a huge surprise for my parents. Later on, like any restless kitty, Clovis destroyed many things: lamps, ornaments, cups… My mother even threatened me: “She’ll be kicked out if she breaks just one more thing”. Clovis never did though: just as she had understood what was going on, she became more docile, stopped breaking things, and began accompanying my mom when I was out at a late party. At the same time, however, Clovis became the owner of the house… and of my bed. She began sleeping everywhere she was feeling like but the center of the mattress became her favorite place. So, every night I had to juggle to sleep… on my own bed! Up to date, she stills sleeps on my bed from time to time:

(Clovis, May 2011. Like Montaigne once wrote, “When I play with my cat, who knows whether she is not making me her pastime more than I make her mine?”)

I’m looking forward to seeing Clovis next month when I’ll be visiting my family and friends for 6 weeks.  In spite of her age, my cat seems to be healthy which makes me quite happy. Although she’s not eternal, the photos I have taken of her will make Clovis live in my heart for the rest of my life…

4 thoughts on “On Guinea Pigs and a Peruvian Cat…”