Previously, I tried to define what exposure is in a very simple way: a photograph is underexposed when the amount of light and brightness is reduced so more shade and darkness are created, and the edited image looks more obscure than the original. In contrast, a photograph is overexposed when the amount of light and brightness is incremented so details that were originally hidden by shade are clearer and the edited version looks brighter than the original. Of course, this sounds very abstract if one lacks of a picture to compare these two concepts. That’s why, let’s see what happens when we underexpose and underexpose a picture I posted some days ago.

Some friends and I launched a Kickstarter campaign to make a short mystery movie in Wilmington, NC. The first day of filming the sky was very grey and it even rained heavily for a while, which made filming both challenging and exciting. We end up filming a distinguished beach house mystery (coming soon)! Among the pictures that I took to document our adventure, I particularly like this one because of the dynamics established by the interaction between the sky, the ocean, and the pier. Let’s see the original:

When seeing the original picture, one could say that there’s nothing spectacular in it. Come on, just some small cumulus that don’t look that threatening, right? So, what happens if we overexpose the photo? What would it look like?

As can be seen, by cropping and playing with exposure, the picture becomes more appealing and intriguing. However, because of the overexposure, the sky turns into a calm sky-blue part of the horizon on what seems to be a quiet but still a bit cloudy summer day. By overexposing the original, the sensation of peace increases. What I wanted to remark, nevertheless, is the almost apocalyptic conditions we faced to make our movie. So let’s see what happens when the original is underexposed: 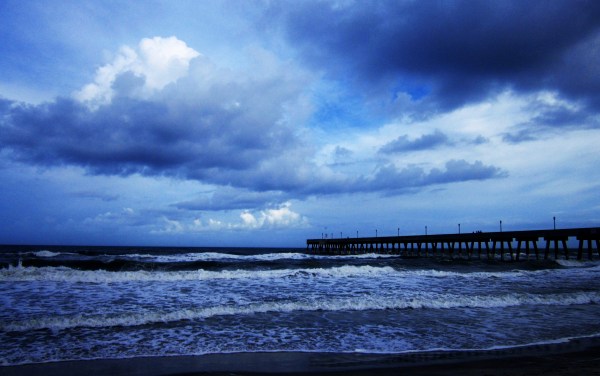 As can be seen, the cloud on the upper left corner gets much darker, the pier becomes a predominant element in the photograph, and the ocean, almost a swimming pool in the overexposed version, becomes an obscure and potentially dangerous area in the new composition. Instead of a picture taken at 4 pm. on an early summer day, the underexposed version looks like a photograph taken at 4 pm… on a midwinter day.

One thought on “Original vs. Edited: Exposure…”